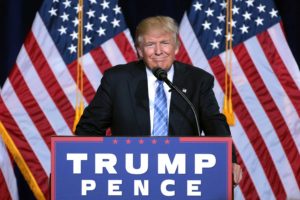 Donald Trump soared to success on the wings of a campaign that didn’t just court controversy but slapped a dog collar on it and rode it all the way to the white house. And through it all, one vessel shone through, one medium that was so perfectly suited to the kind of message that Trump wanted to spread that in hindsight his victory seems almost fated.

Trump, the self professed “Hemingway of 140 characters”, owes a lot of his success to Facebook, Twitter and other similar platforms. Before we go into Trump’s own mastery of the medium, let’s take a look at some of the fundamental features of social media that made it such a perfect platform from which his campaign could take off.

These are platforms that are, on the face of it, an embodiment of digital democracy but that can all too easily turn instead into an insidious breeding ground for ever more homogeneous views. This particular aspect of social media is one that fed into the feeling among many Trump supporters that they were part of a group, an overlooked and disgruntled group that deserved compensation – a group that deserved their country back.

Friends tend, on the whole, to think more or less alike. And Facebook is a perfect example of this. According to a 2014 study, 47% of those who consider themselves politically to be “consistently conservative” said that the majority of political views they expressed on Facebook are in line with their own. Further, 44% of those who consider themselves “consistently liberal” said that they had blocked or unfriended people who had expressed views they disagreed with.

An acquaintance of my own who posted a status in support of Trump’s victory went through and deleted dissenting comments on the basis that it was ‘his status’ and he didn’t have to listen to people disagreeing or complaining.

And this is a problem – something that has all the hallmarks of an open and democratic forum for sharing (and is statistically the most popular political news source among younger generations ) can end up serving largely to reinforce our own views and opinions. When a public forum reads like a private journal, it might be time to stop and think.

Trump targeted a demographic already dissatisfied with ‘the establishment’ for a variety of reasons and placed himself in diametric opposition to it. For an wealthy, aged, white male to figure himself as the outsider takes some doing, but he did it largely by rejecting three apparent establishment hallmarks: political experience, political correctness, and the mainstream media.

The latter is what’s important here – by rejecting all mainstream media as part of a crooked establishment, he achieves two things. First, any public criticism of him can be put down to bias, and second, all the truth-giving power is handed over to alternative sources like social media, particularly the corners that he controls himself.

Social media is portrayed in this narrative as […]

The post TRUMPED: how to win an election in 140 characters or fewer appeared first on J SEO.