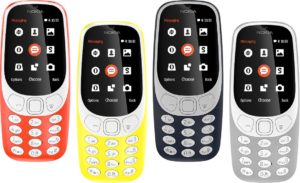 It’s out with the new and in with the old as once-great Finnish mobile manufacturer Nokia takes us back to the halcyon days of slow texting, long battery life and phones that can stop a bullet. That’s right, the 3310 is back.

Except that’s not quite true.

And it’s not really a statement of intent for the wistful (or even the ironic) luddite, it being announced alongside two new very-much-smartphones.

No, what this is is the most ludicrous marketing gimmick since sliced bread. And look how that turned out.

Nokia is not a name that’s been on many lips for a while now, and its return may stir some excitement inside the more nostalgic among us (which, let’s be honest, is quite a lot of us these days), but this latest offering is not so much a grand resurrection, nor a soothing antidote to the nascent dystopia we’ve found ourselves in. It’s more like a visit from an uncle who you haven’t seen since him and your aunt divorced two decades ago, who used to be fun and cool and play games with you as a child but now just seems out of touch and out of place and slightly misshapen, and turns up to your house uninvited, armed with a Sega Dreamcast.

The new 3310 is basically a ‘feature phone’ (that’s industry euphemism for non-smartphone) that looks a little bit like the old 3310.

Actually just a little bit though, here’s the two compared:

As you can see it’s sort of got the same design, except that all of the buttons above the key pad have changed, and the screen is in colour and takes up the whole top half of the phone instead of a tiny little window, and it’s all a little bit more curvy. In fact, the main similarity between this and the OG 3310 is the name, and anyone who needs a reminder of the fact that you cannot decide the nature of a thing by giving it a certain name need look no further than the Democratic People’s Republic of Korea.

It comes in three colours (red, yellow and blue), and you can’t switch around the cases like you could with the older version. This means no more impressing babes by looking superfly with the latest hit pop stars in your pocket:

The Nokia 3310 being marketed by HMD (the start-up actually behind the phone who have licensed Nokia’s brand for the next ten years) as a “digital detox” phone. The problem is, plenty of these already exist. Like this one than I bought for a fiver:

The new 3310 is basically the kind of phone that would have been pretty impressive around 2005.

It has internet connectivity, sort of. The 2.5G connection will just about let you browse […]

The post Nokia Re-Releases the 3310… Sort Of appeared first on J SEO.